What would Ben say? 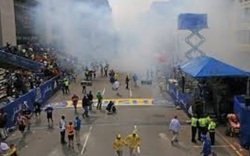 The tragedy of the Boston Marathon bombing is something that many of us are still wrestling with.  Sometimes it helps, after an experience like this, to turn to the wisdom of the great men and women of history ... like Ben Franklin.


How would Ben have responded to this event?  In his own day, having dealt with wars, civil disturbances, power struggles, and cultural issues, Franklin was no stranger to controversy and conflict.  But somehow, Ben always discovered ways to find the middle ground, and to bring things to a practical, win-win resolution for all concerned.


He was also a man of great sensitivity and compassion, concerned for the public welfare at every turn.


So, what would Ben say about the Boston Marathon bombing?  Take a look at this brief video, for an inspiring glimpse of Franklin's response, had he been there....